Bijoy B K – An Intelligent Young writer and Independent musician 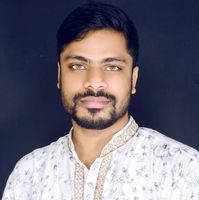 Entertainment Reporter: Young Writer Bijoy B K released some book depends on his recently released Instrumental music. Bijoy B K is a Bangladeshi Young musician has debuted in his music career instant. His very first release ‘Instrumental Soft’ is now live on Spotify, Amazon Music, Deezer, JioSaavn, Tidal and YouTube music. He graduated from University of rajshahi, Bangladesh. His department of study was population science and human resources development (2013-2019). He has written some books, such as– (1). Instrumental soft ; it is written by independent Musical Artist and writer by Bijoy B K , based on recently released Music of Bijoy B K named Instrumental Soft. (2). Definitions of Instrumental Music : Collections of definitions of Instrumental Music By Bijoy B K (Instrumental Soft). (3). Backgrounds of Young living independent Musicians (Jony Khandaker, Humphrey Mafabi , Hasin Mahtab): This book is written by Bijoy B K , on behalf of this … (Backgrounds of Young living Musicians 1). Bijoy’s most powerful and enchanting instrument is his voice. The song—which serves as a testament to the different stages of healing—is a sparse nine-track undertaking that reveals just how resilient our protagonist truly is. Bijoy’s story is an uncommon one, but an uplifting one nonetheless. Bijoy B K is a Bangladeshi musician, music composer and Independent musical artist. He born on 12 june 1995. From childhood, Bijoy has a good inspiration for music. At early age he made some Instrumental music. Instrumental soft is one of the most popular Instrumental songs by Bijoy B K. At the beginning of 2020, he passionately started to learn music composition and instrumental music making. Bijoy is now working independently and trying to make music professionally. His first song went live worldwide on March 2021 at numerous music streaming platforms including Spotify, Amazon Music, Deezer, itunes, YouTube music, JioSaavn, Pandora, Napster and so on. Bijoy B K’s released most famous and popular songs given below: (1). Instrumental Soft, (2). A Blue Bird, (3). Smell of independent, (4). Drummer Boy, (5). Night Driver Bijoy B K has already got verified on some leading music streaming platforms among the mentioned. Recently he has verified on Google and YouTube as a musicial Artist. He is continuously trying to release more and to be regular in his job! He now wishes to be a part of Bangladesh’s upcoming Music industry and claim notable rank on leaderboard. Nowadays some of his popular Books in google Books and amazon.